The Laser dinghy is one of the most popular one-design classes in the world with over 200,000 built to date. Designed by Bruce Kirby in 1970 and an Olympic class since 1996, the Laser provides physically challenging and tactically exciting single-handed sailing. With 4.7, Radial, Standard rigs, the Laser dinghy caters for all ages and weights.

The Laser fleet at Littleton has about 30 boats that sail regularly. There is a wide range of ages and abilities throughout the fleet resulting in good competition and companionship at all levels.

We race as a fleet on Saturdays and usually have more than ten Lasers competing. The general handicap and pursuit races on Thursday evenings are also popular.

We hold an annual Laser Class Open Meeting which is part of the Thames Valley Laser Traveller Series. View photos from one of our open meetings …

Martin Newman is the Laser Fleet Captain.
If you’d like further information about the Laser fleet at Littleton Sailing Club he can be contacted at mnmartman@aol.com. 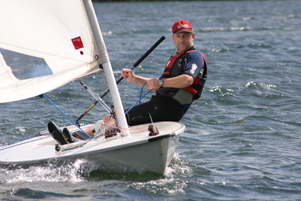